“I just wanted to write an e-mail of gratitude for Yellow Dog UK. I was introduced to this charity, by a friend of mine, in the summer of last year shortly after we adopted our 21mth old (at the time) Tri-coloured Papillion called Rio. He came to us under-socialised and on his fifth home. He’s had fear issues with other dogs along with a number of other problems which we have been working hard to resolve.

I have been using the yellow ribbon when he has been out on walks and at his obedience and heelwork to music classes. The yellow ribbon has allowed us to help him with his fear around other dogs, and he has come on in leaps and bounds. In fact I have yet to find anything that he isn’t willing to turn his paw to including obedience and HTM along with some scent work. I have found that using the yellow ribbon, especially, has helped him to gain confidence with other dogs and to be given the space he needs to work happily.

I plan to continue take him to weekly classes, as I still do with my other dogs, and to continue to help him improve and thrive within himself and in a number of disciplines especially obedience and heelwork to music, possibly with a view to competing in the future and completing the Good Citizen Dog Scheme. Given how much Yellow Dog UK has helped Rio and I, as a handler, to improve I would highly recommend using a ribbon if your dog needs space!” ~Alexandra Seal. 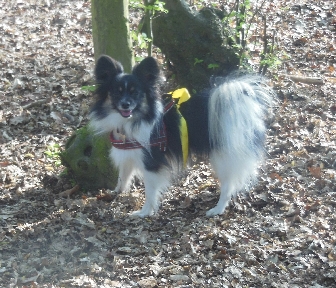 "Thank you for making Daisy's life so much better! I just wanted to say how well people are reacting to Daisy's vest - it makes a huge difference walking now and I'm actually finding that people are seeing the vest from quite a way and giving us a wide berth which is helping Daisy no end she cannot cope with the initial meet and greet of any new dog due to a broken leg as a puppy which ment she missed a vital learning curve in her first 6 months of her life. She is slowly learning that she can walk past dogs and not to get so stressed! I have also started using a yellow ribbon on my 8 year old partially sited English bull terrier, Eddie, who cannot cope with any dog due to his loss in his sight which for him is a massive thing as he still enjoys walks on our local field. Sadly  He will never improve due to his age so for him it is really important that I can provide him with stress free walks. Awareness is very important so we can all provide a better environment for our dogs." ~ Sarah Bishop. 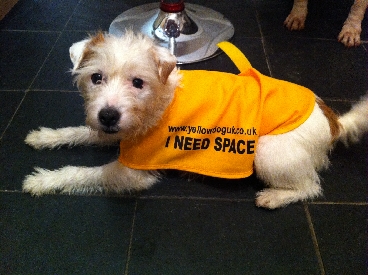 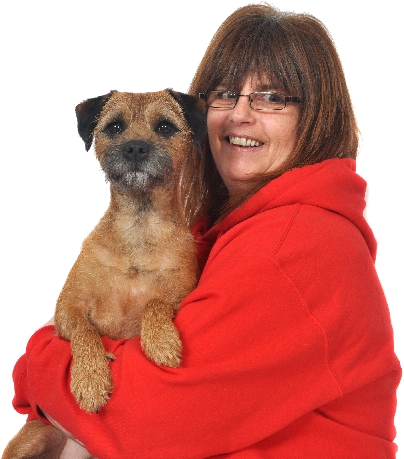 “Rayne is a 4 year old Border Terrier.  She possesses a typical terrier nature, as in she was bred to be feisty, resilient and fearless. Rayne gets anxious around boisterous dogs, especially when on lead.  Rayne also began to suffer from tummy troubles and by the time she was a year old, she was diagnosed with inflammatory bowel disease.  For the following year we tried several exclusion diets to try to control her issues, sadly she ended up on steroids long term in order to control and alleviate her discomfort.  Understandably, when she is in a lot of discomfort with her tummy, she becomes terribly grumpy.

Training has been on going with both Rayne and I, and we compete in agility and flyball. Sometimes people are not very understanding when I have asked them to keep their dogs away from Rayne which is where Yellow Dog UK has helped! We discovered Yellow Dog UK in January 2013 and I cannot thank them enough for their support as well as their invaluable products.  The ribbon and vest really helped with training as well as our daily walks.  I also took it upon myself to contact local press and canvassed by putting up posters around all the places we walk as well as taking the posters to local vets, schools and community centres.  I would take every opportunity to talk with people about Yellow Dog and what it means.  I have also set up small Yellow dog tables at agility and flyball shows around my area. 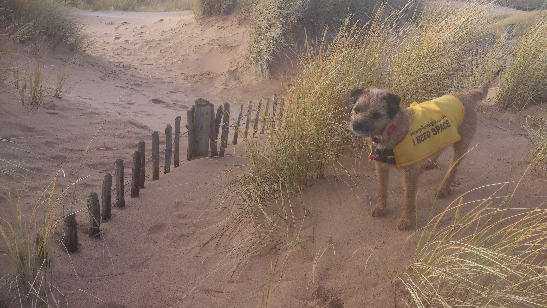 Rayne’s training has come on leaps and bounds because people now respect our space and we theirs.  Walks are now a great pleasure and the bond between Rayne and I has also grown because I am more relaxed and trusting with her, clearly she feels the same way. I highly recommend Yellow Dog UK products as a helpful training aid but it is important for people to remember that it can take time for word to get around about what the yellow ribbon means, and for that to happen you may have to help get the information out there in your community as I have in mine with great and continued success. Rayne now has another adopted dog living with her and a lot of the time she can be walked without the yellow ribbon or vest.”

“Chester is now 4 years old, we took him on at the age of 6 months and he was a very scared and nervous dog.  Although he eased into our family very quickly he still has huge nervous issues with strangers and other dogs.After trying various ways to help him, socialisation, personal training etc, nothing has cured his nerves.

Just over a year ago we discovered Yellow Dog UK, and it’s the best thing that could of happened for Chester. As he is such a large breed its not automatically obvious to people that Chester is so nervous. They see him on a lead and don’t think twice about letting their dogs run freely up to him. It would put Chester into a state of panic, his tail would go between his legs and he’d circle me looking to escape, so sad to see him so vulnerable.

We started off with the yellow ribbon and bandana, and that’s when the Magic started. I gave us a voice. When we walk (which is over a field/park behind our house) I spot a free running dog and sit Chester calmly next to me. I  then calmly shout over to the owner, “Could you please re call your dog”. In most cases the owners did just that, some would say their dogs are ok in which case I would say “It may well be but my dog is a very nervous dog and your dog is causing him unnecessary stress."

We started to realise because of his size people were interested in hearing this, and often stopped to question us which gave us the opportunity to spread the meaning of the yellow ribbon. I started to grow more confident on our walks and because of this Chester is more at ease on his walks. I asked Yellow Dog UK for some posters and ribbons and asked the forest commissioners permission to place them on their information boards. We then spent a day putting them up and handing out ribbons to people that were interested. We socialize with a lot more people now because of Yellow Dog UK, and the best part is that we have helped other people and their dogs by spreading the word”. 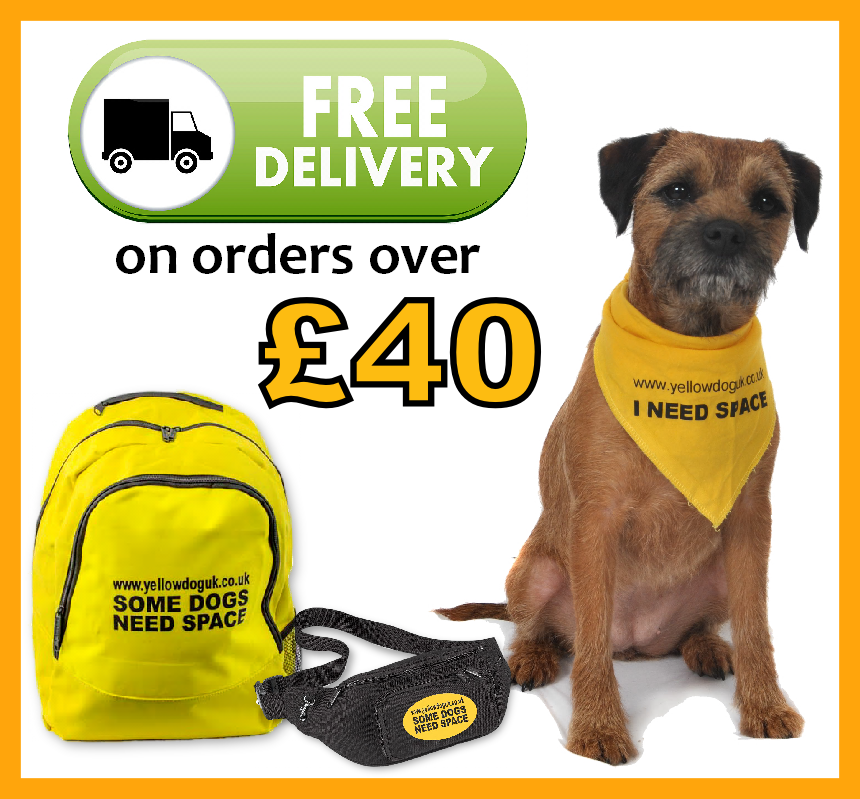 HOME
ABOUT US
SHOP ONLINE
GALLERY
FORUM
CONTACT US
HOW YOU CAN HELP
VIDEO
NEWSLETTER
PRESS RELEASES
SHOWS/EVENTS
TESTIMONIALS
Yellow Dog UKTM is a registered charity raising awareness that some dogs and their owners may need space for a variety of reasons when out in public. We pledge to supply free yellow ribbons to owners whose dogs needs space and that all donations will be used to promote and raise awareness of the campaign. View our charity registration certificate HERE.

This email address is being protected from spambots. You need JavaScript enabled to view it.  DONATE  FREE RIBBON